The modern style links the vision of interior design to architecture, in a relationship of mutual collaboration. Between rigorous furnishings, bright rooms and a prestigious appearance, the modern-style interiors express timeless elegance.

The modern style in history: the masters of design

To fully understand the modern style, it is useful to take a few steps back in time to its historical origins.
We are between the two World Wars in a context of renewal that involves the formal plan of architecture, but also urban planning and design.

Starting from a strong conception of architecture as an organic structure in relation to the external context to which it belongs, the Modern Movement also sees the house for its social use and not just as a family unit. Frank Lloyd Wright with his organic architecture gives excellent examples.
Among these, the Waterfall House, designed in its architectural conformation in strong relationship with the surrounding geological and natural context. Each element is configured both on the architectural level and on the interior design level based on a strong contamination between inside and outside. In doing this, the choice of proportions based on the human figure is fundamental.

Natural materials combined with organic shapes that favor horizontality, but also harmony and brightness become the key principles of the Modern Movement. Instead, the priority need is to achieve the best functionality of the building, which can also determine its aesthetic beauty.
In doing this, the house frees itself from the unitary vision to which it was accustomed to take on a social meaning in relation to the surrounding buildings.
The extreme example is the building that itself becomes a city, as in the case of Le Corbusier’s Unitè d’Habitation. 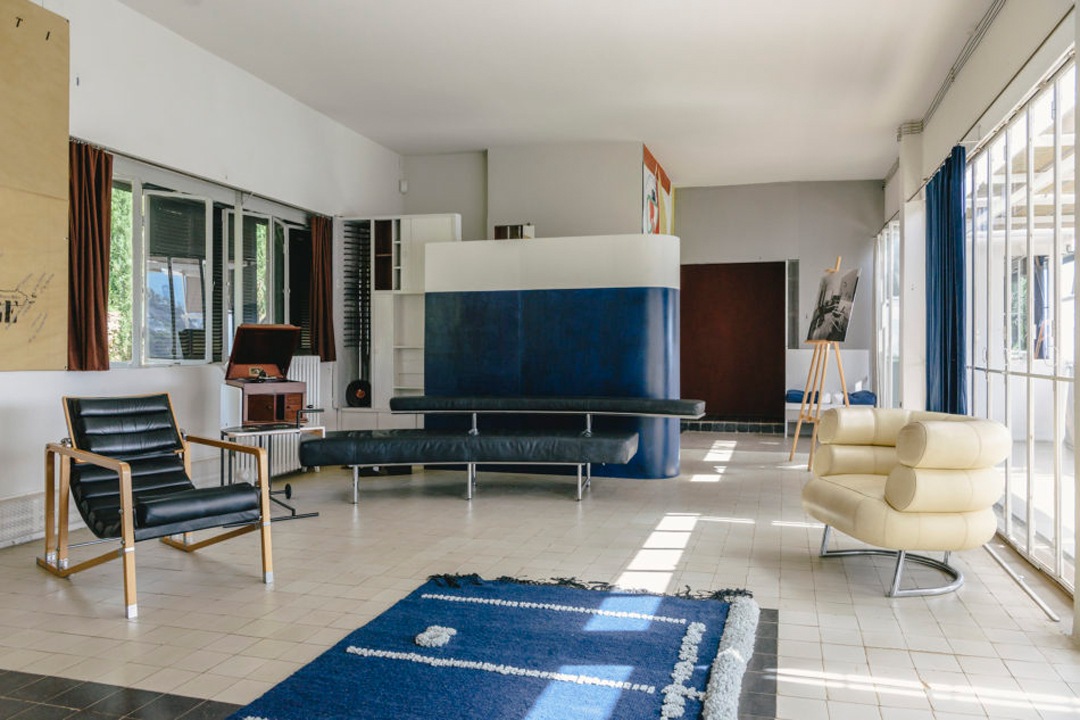 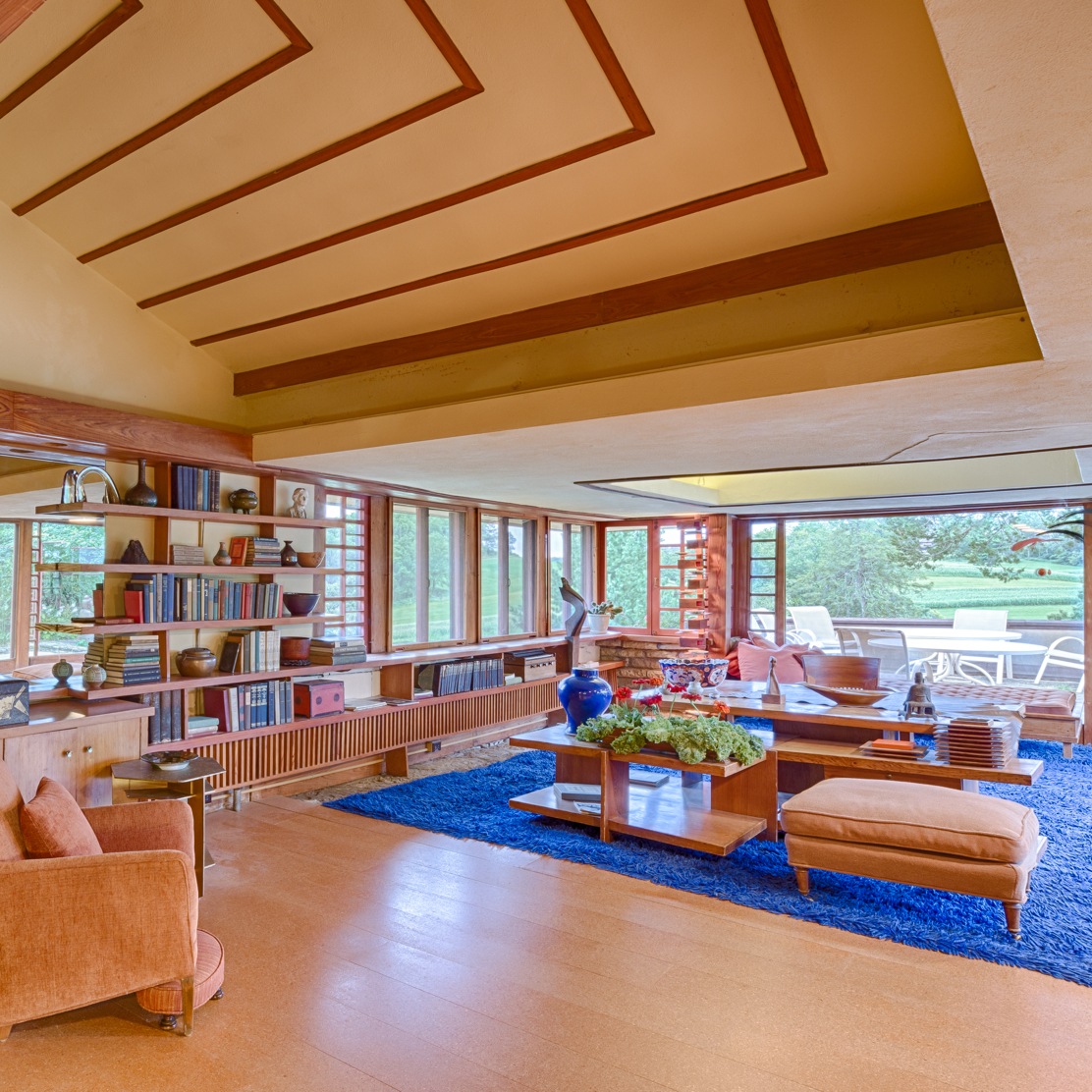 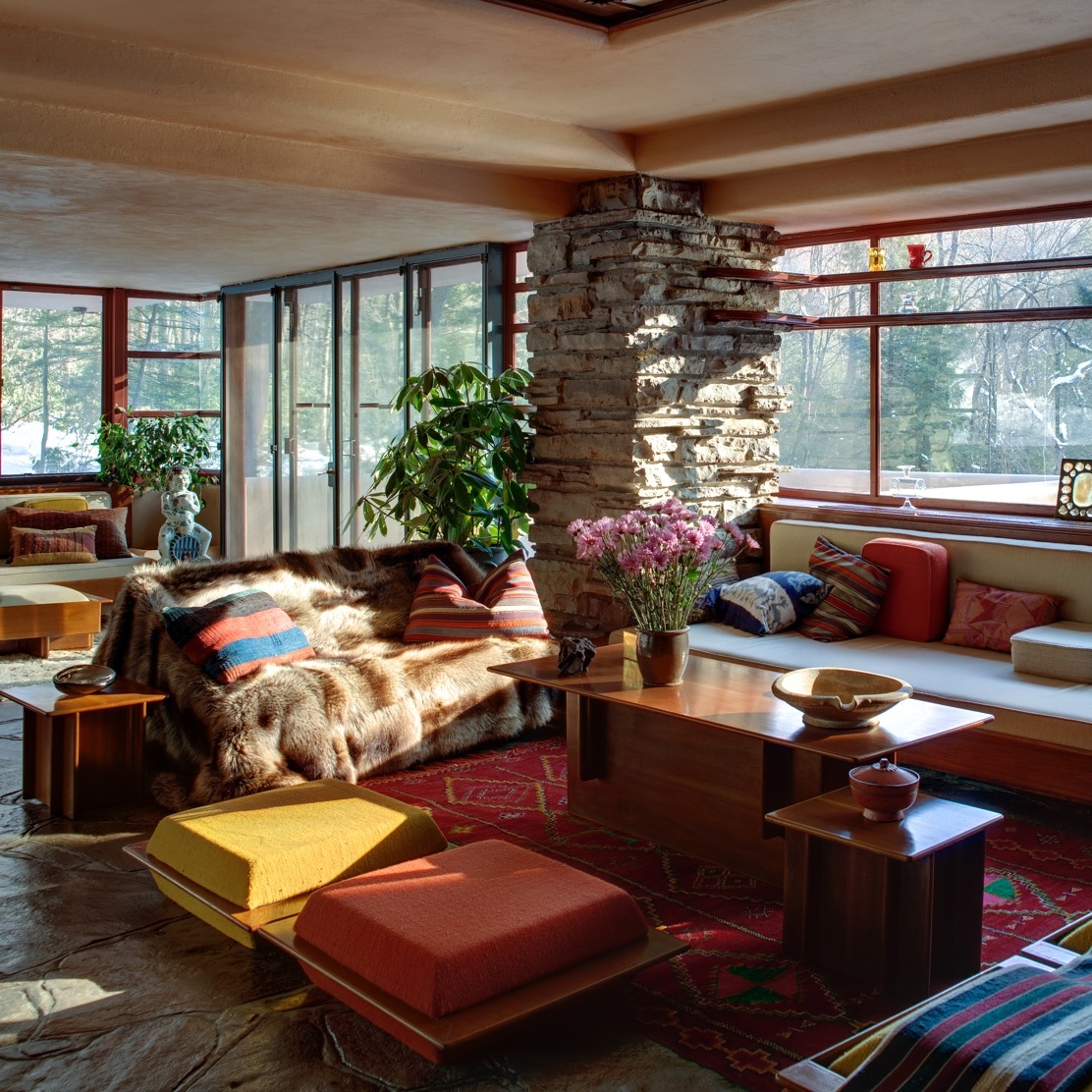 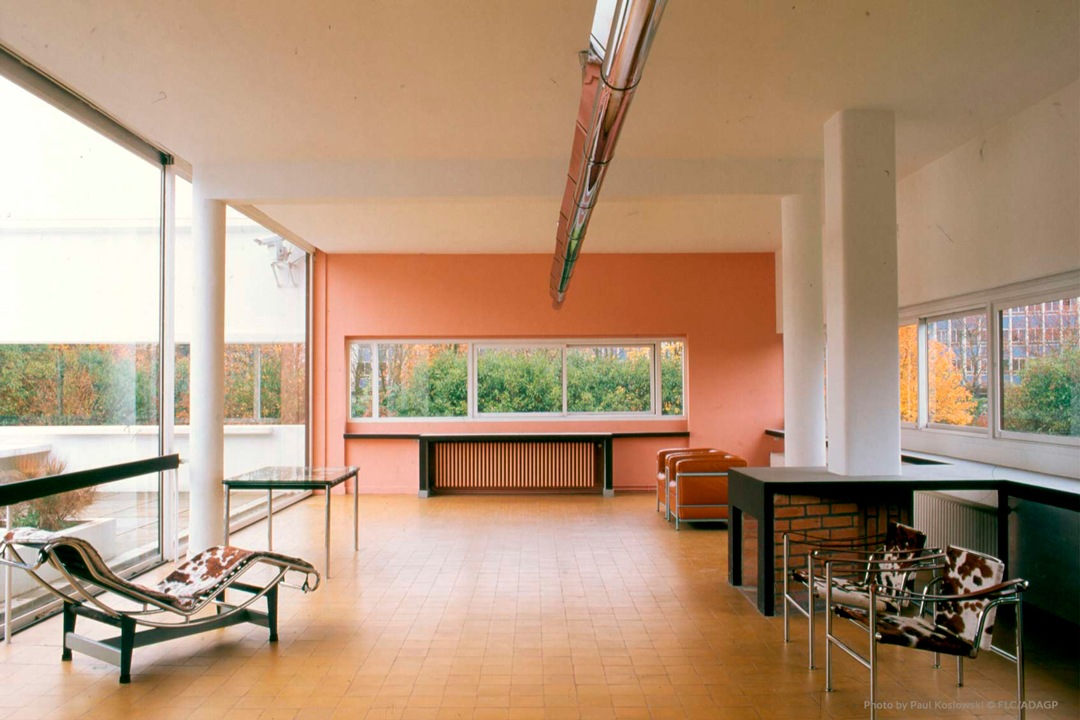 Villa Savoye by le Corbusier. The relationship between inside and outside is expressed in bright rooms and ribbon windows 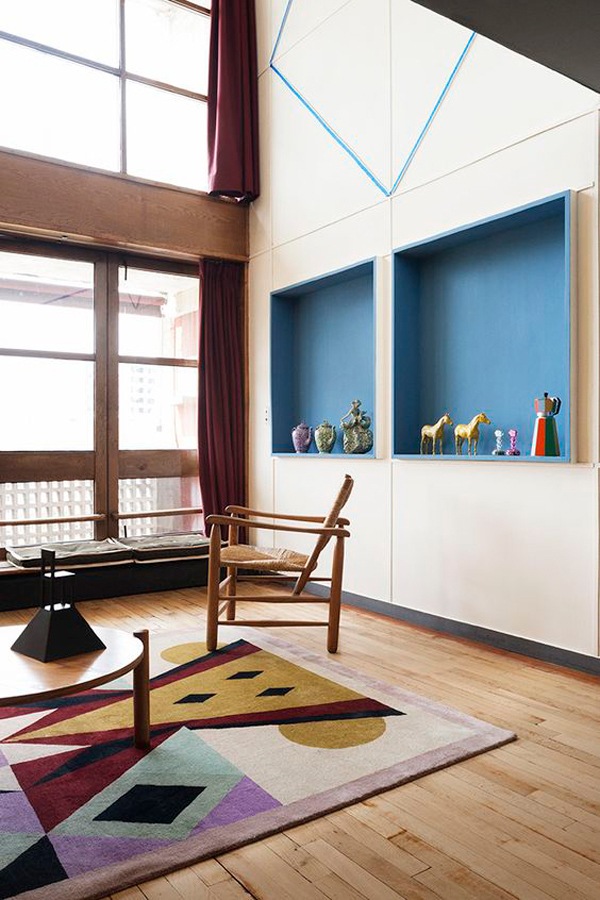 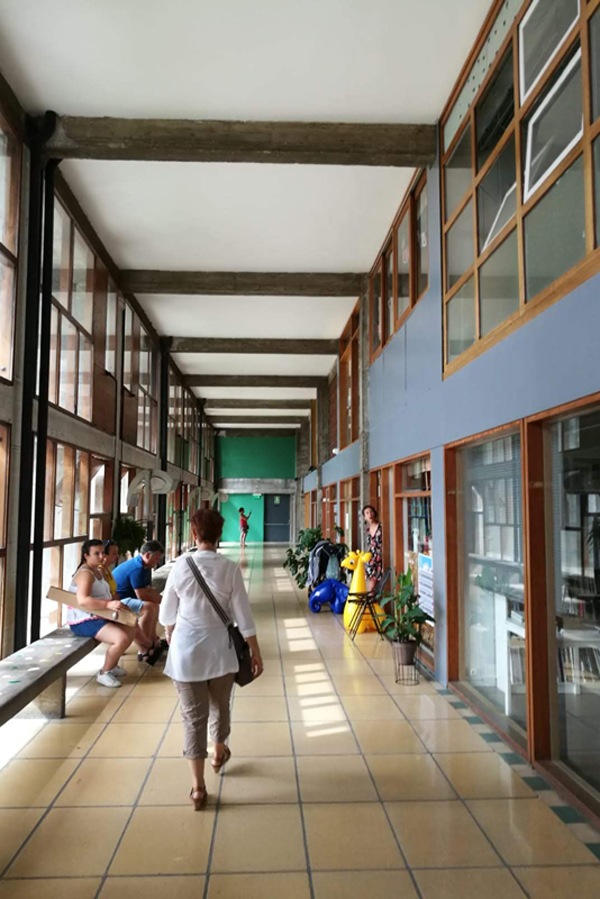 Unitè D’Habitation, Le Corbusier. The building becomes a social community by offering, in addition to the family housing units, all the services necessary for individual life.

The modern-style interiors both in the course of history and in the contemporary context are based on a strong relationship with the architectural context in which they are inserted.
This is how bright environments are created. Here, the exterior constantly communicates with the interior through functional choices that also justify the aesthetics.
Therefore, windows can take on a more elongated shape and it occupy a higher position than the standard ones. This allows the entry of natural light, which will obviously be studied according to the optimal orientation of the house, but at the same time allow the inhabitants not to be seen from the outside.

The subdivision of the rooms between the sleeping and living areas is based on a logic that considers the orientation of the house and its visibility or protection from external factors.
The hearth is definitely a central point in the design of a modern style home.
A place of aggregation and socializing, it expresses hospitality and intimacy at the same time, creating a strong suggestive interior.
For this reason, in modern homes par excellence it occupies the central position with respect to the living area, becoming the fulcrum for the arrangement of the remaining rooms. 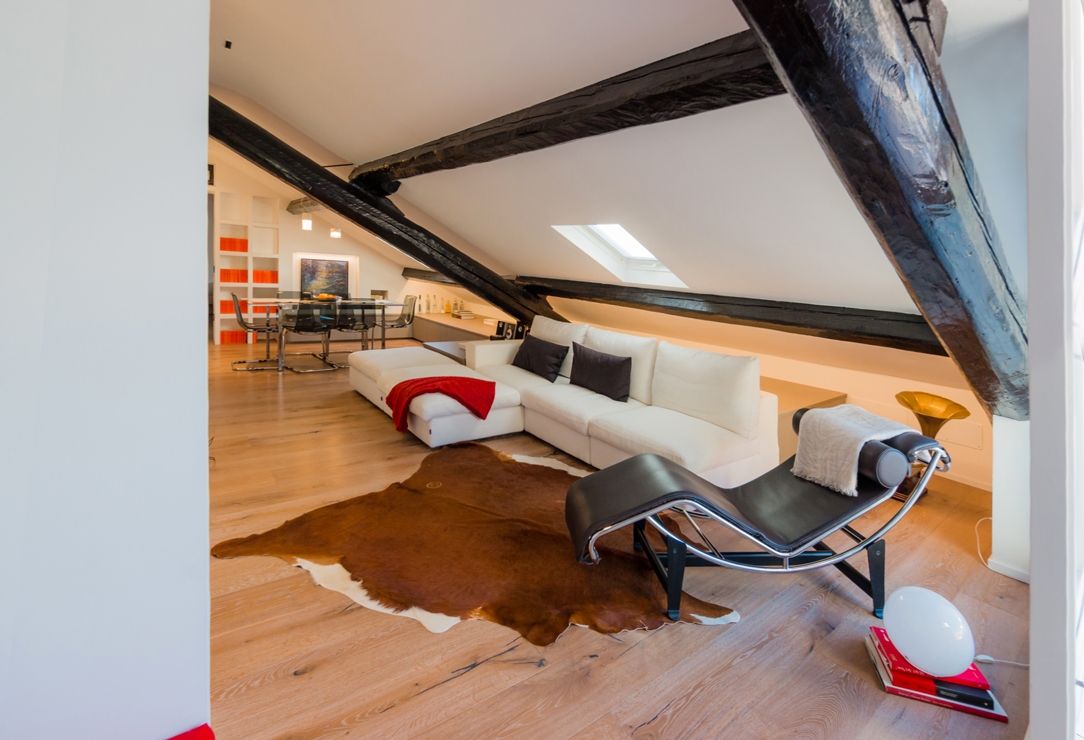 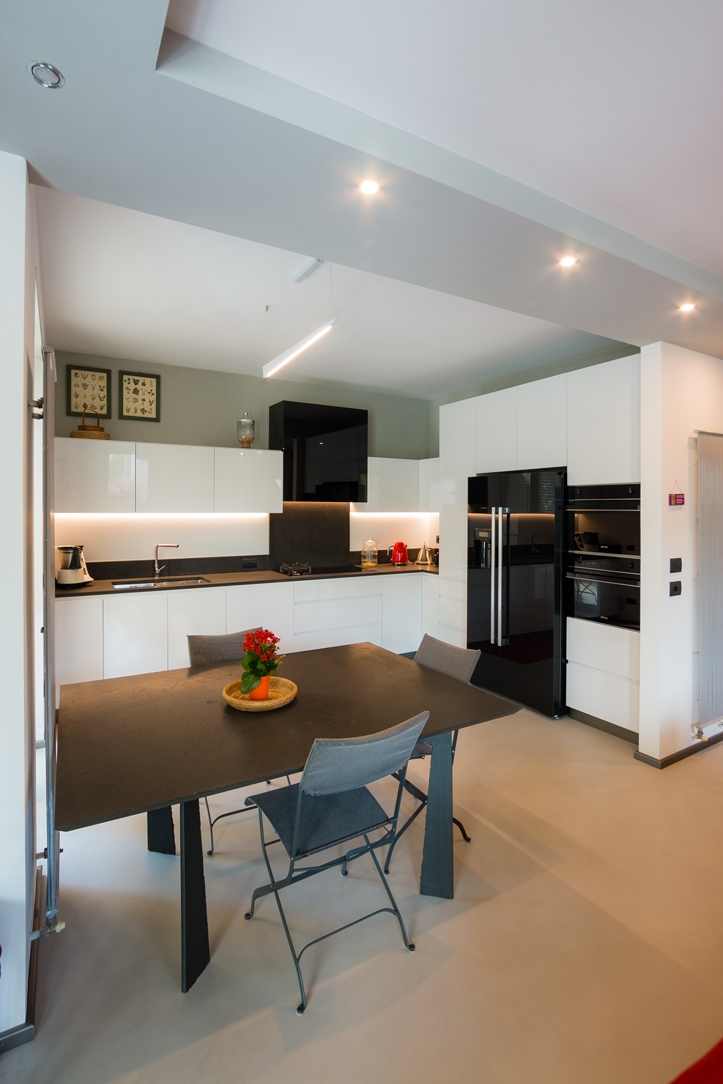 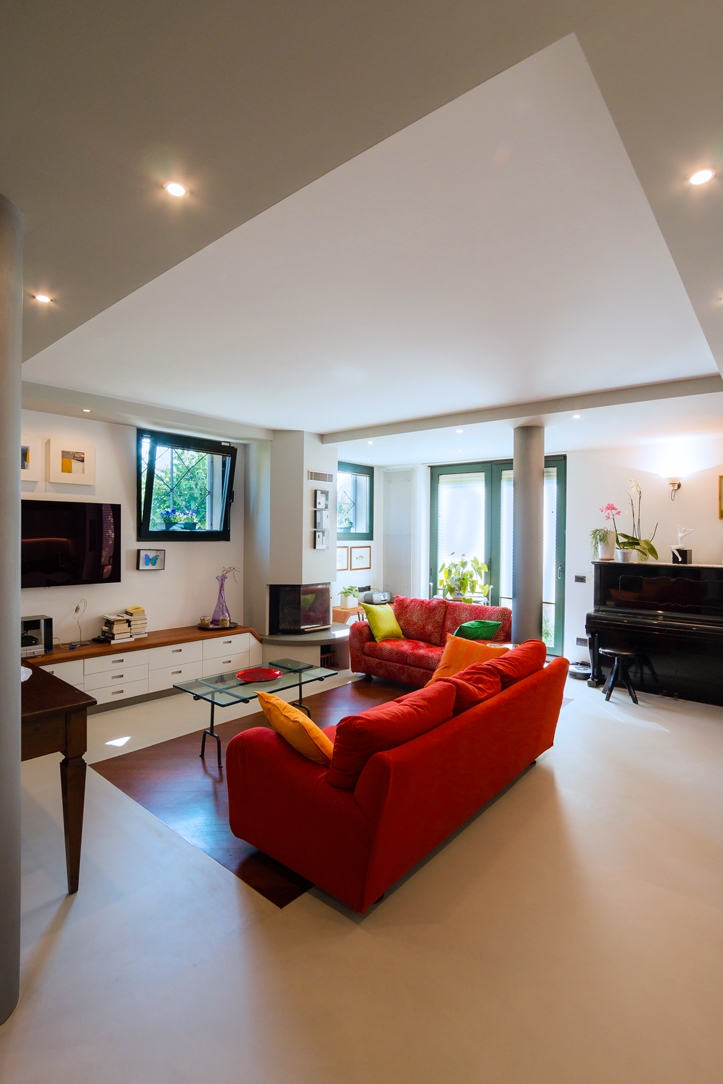 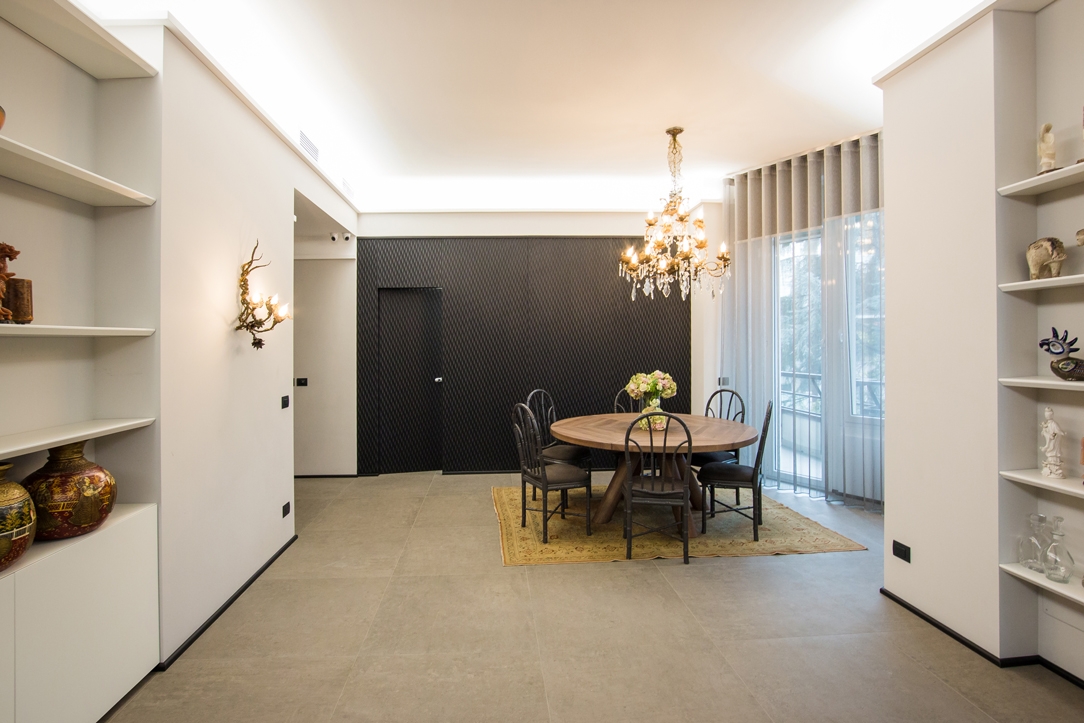 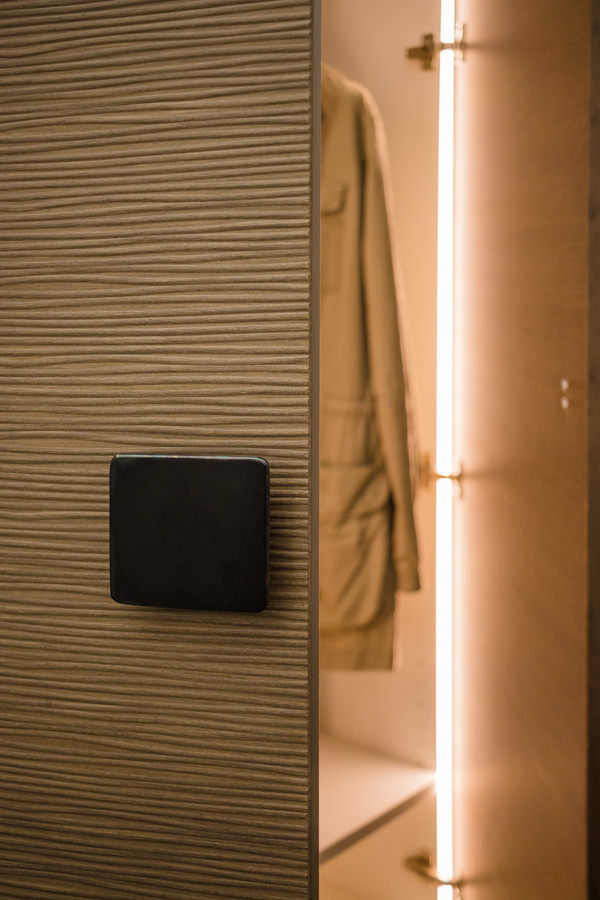 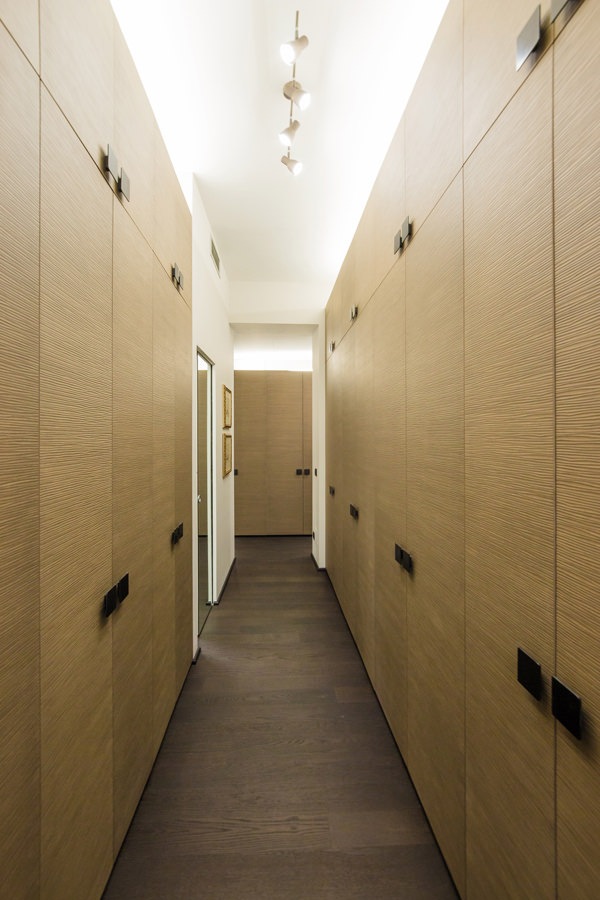 The equipped corridors of this Modulor realization express their modernity in the choice of material.
Soft and textured to the touch and extremely elegant to the eye. 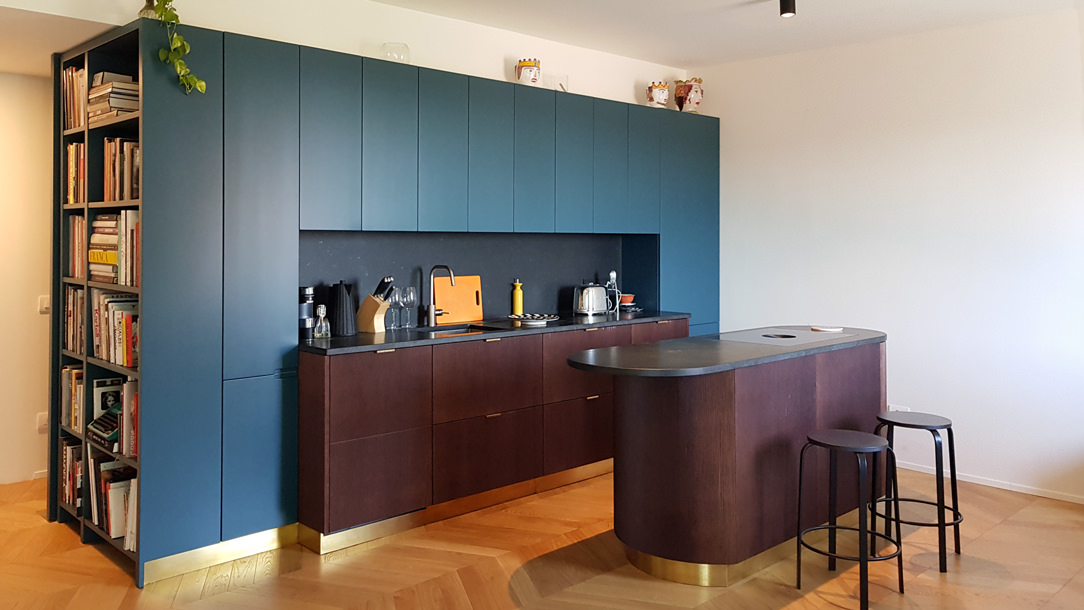 Shapes, colors and materials between past and present

The choice of materials in a modern style also comes from the contamination between inside and outside.
Great importance is given to materials capable of enhancing the brightness of environments through their reflective and brilliant surface, even better if of natural origin.

Wood knows its maximum expression both in the traditional form of the Modern Movement and in its contemporary conception.
Chosen for its malleability and natural aesthetics, it brings the exterior directly into the home interior, also molding itself into irregular shapes. Over the years, it has also known the polishing treatments and the recent painting that make it possible to obtain reflective surfaces capable of giving brightness to the environment.

Neutral tones are favored, starting with the classic white, but colored variants are also welcome especially in the current years. In this sense, it is important to underline how the contemporary trend in the modern style prefers monochromatic colors and tone-on-tone games that opt ​​for desaturated colors.
Prestigious and elegant interiors that do not, however, give up a touch of color capable of giving character to the rooms.

The design forms abandon their rigidity and linearity in favor of simple but sometimes irregular solutions. To enrich a modern style home, the icons of Modern design cannot be missing. Here then are seats with leather padding and chromed aluminum structure with slender lines. 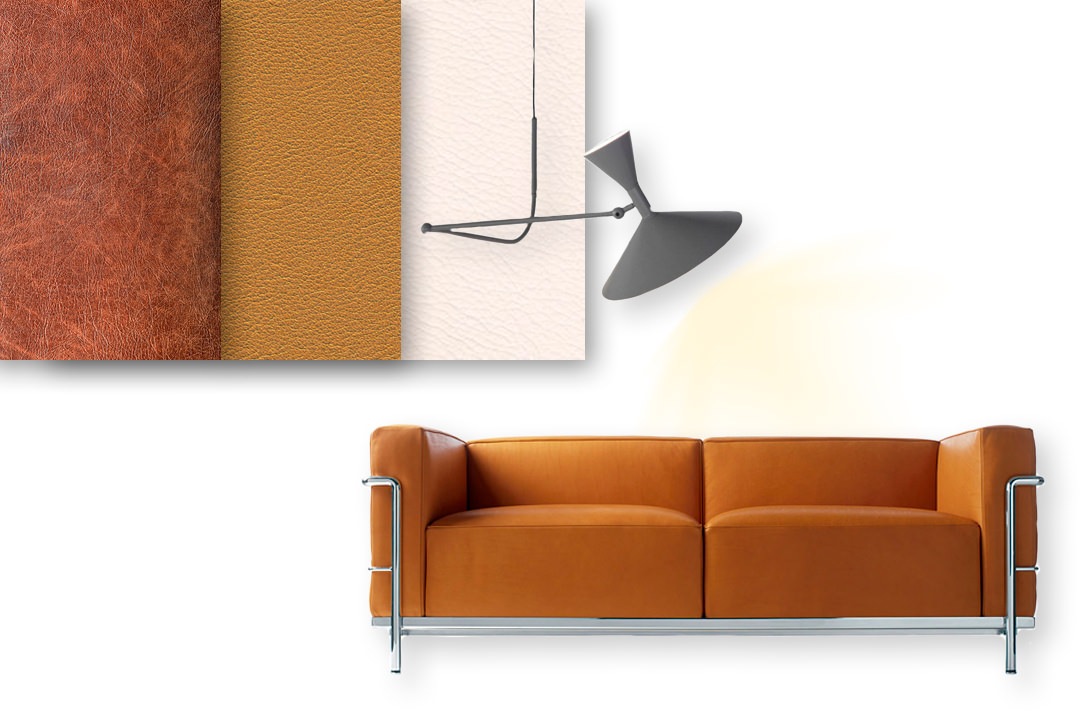 Materials, finishes and aesthetics of the modern style, including upholstery in warm-colored leather and chromed aluminum 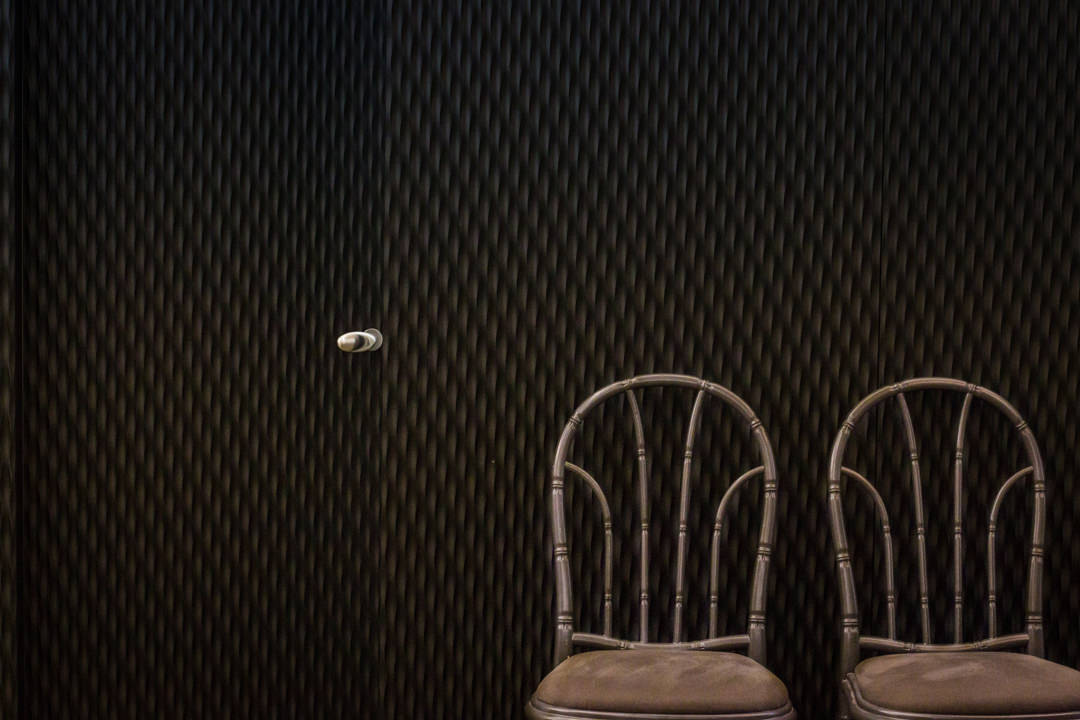 The attention to detail of this wall is expressed in an elegant and monochromatic three-dimensional surface inserted in a prestigious Milanese apartment.
Inside there is a door identifiable by the handle with soft modern shapes.

In the modern style of recent years, the great icons of design are often inserted in environments that are more daring, not only with neutral colors but also desaturated colors with a timeless beauty

The rediscovery of modern style

In recent years the modern style has undergone a great revaluation. The soft but rigorous shapes of the design icons of the Thirties are back in vogue in a contemporary reinterpretation proposed by the main brands.

Just think of the Five To Nine dormeuse proposal, born from the Studiopepe project for Tacchini (2020) or the Camaleonda modular sofa designed by Mario Bellini for B&B Italia (2020). But also, the new Pacific (project by Patricia Urquiola for Moroso) and Soriana (design by Tobie and Afra Bianchin Scarpa for Cassina) both launched on the market during Digital Design Week 2021. 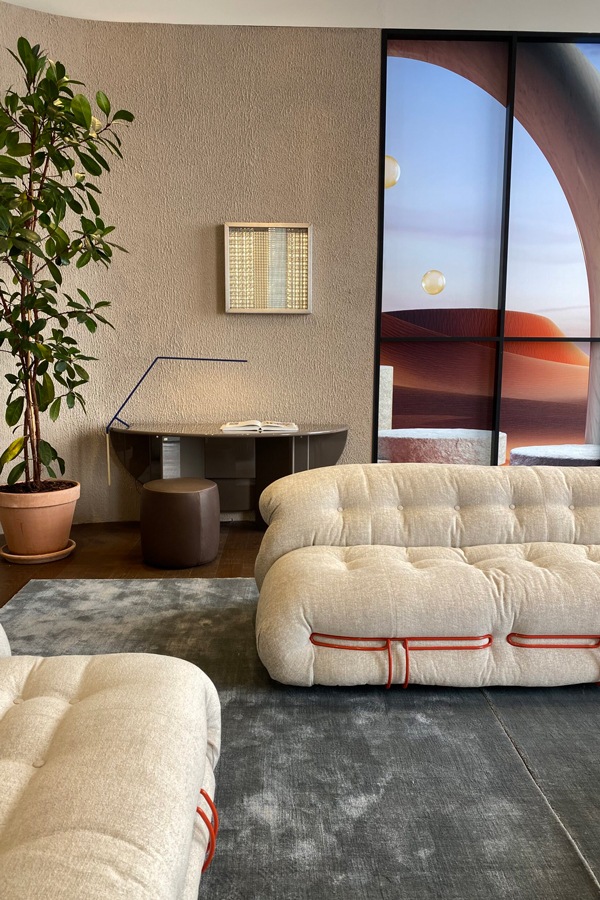 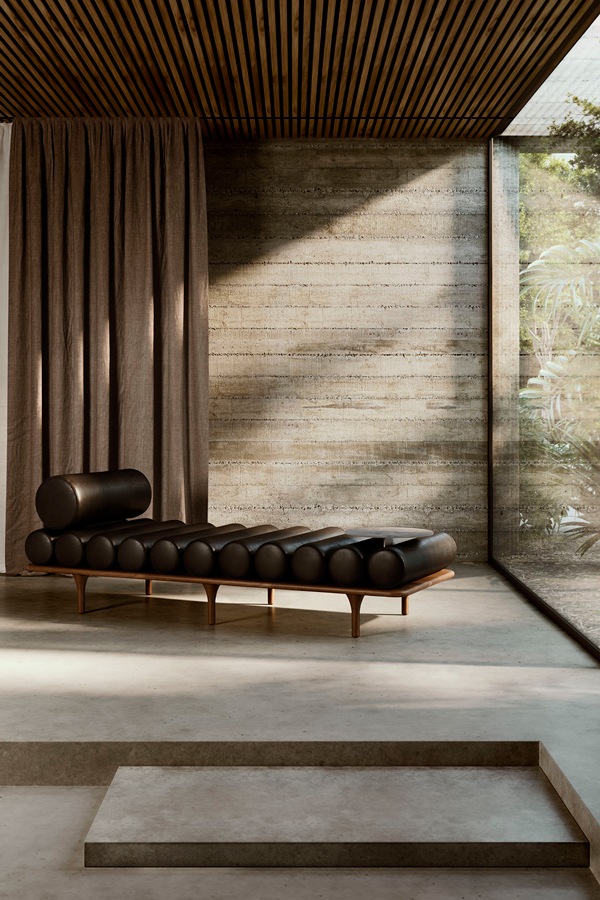 With its rigorous and prestigious interiors, the modern style is aimed directly at personalities who love architecture and its relationship with nature. Characterized by a timeless beauty, it is aimed at rigorous characters but at the same time open to new changes.

← Giving new life to furniture: adapting them after a move Iron furniture for a contemporary style apartment with refined details →